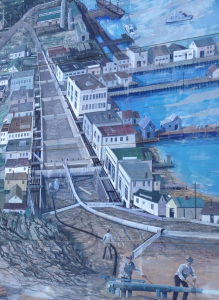 I just visited Port Angeles, WA to see how they coped with flooding . . . back in 1914. Built on mudflats, it was common for the young seaport to flood with every rainstorm and high tide. Their solution: raise the waterfront area.

Concrete walls were built along each side of Front Street and its cross streets creating the retaining walls for large pools where the street had been. These pools were filled by sluicing dirt from the clay cliffs above the town and piping it into the pools. When filled, the row of dirt pools were covered with wooden planks (and eventually paved) to become the new street. Sidewalks were constructed on wooden pilings over the old ones. The street-raising process took only six months!

Today in many communities along America’s coastline, owners are considering how to protect their buildings from sea level rise. If you live in Savannah, Annapolis, Huntington Beach or another city where sea level rise threatens to flood historic neighborhoods (not to mention millions of newer structures), you might publicize the Port Angeles experience to your neighbors and town officials. What they did over a hundred years ago to make their waterfront safe from flooding could be a model for your actions today.

The sooner we build protections, the less we’ll pay for them. For years, Rhode Island planning

Insure your neighborhood against flooding

Some of these homes can’t find the money for repairs. What happens to the neighborhood?