Biking to work can help climate-proof your budget.

What does your commute cost you?
Same as a month’s rent? 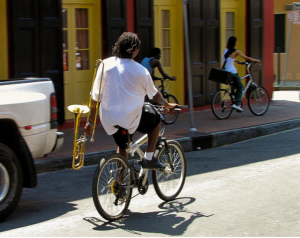 If you’re a typical Boston driver, traffic congestion costs you an estimated $1,760 per year. High commuting costs are found all across the country and are forecast to grow 50% by 2030. Saving some of this could help a family cope with other accelerating costs, like the many now being caused by climate change.

New Orleans is one city that’s working hard to promote cheaper – sometimes faster – bike transportation. Already one in 30 local residents rides to work on bike-friendly streets and a network of striped bike lanes. That’s double the rate from 2007, the sixth highest rate among large U.S. cities, right between Seattle and Oakland. And the city expects to double that rate in just the next three years! In addition, a 700-bike sharing system is set to launch next fall.

Would your personal finances benefit from replacing car trips with bike trips? If so, there are ways to encourage bike-friendly infrastructure. If that’s not likely, maybe your next hometown should be more bikeable.

Commuting costs are only going up

Want to know where it’s cheap to commute? Check around your area with the H