It was a bad week for the national debt. 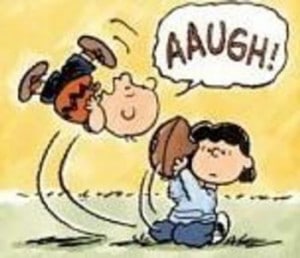 “This time will be different, I promise,” says Lucy.

How does hope triumph over experience time and again? Two months ago, candidates were asking us to send them to Congress because they were fiscally responsible, the right men and women to make tough decisions on the spending cuts and tax increases needed to reduce our deficit.

But last week Congress made two decisions. The first: the Senate rejected a roll-back of the Bush tax cuts for the $250k+ earners. If tax cuts are extended for the middle class, the rich get theirs too. Congressional economists consider that the least effective way to create jobs.

At the same time Congressional leaders and the White House are discussing extending jobless aid for the long-term unemployed. It’s billed as a compromise.

That’s like saying, “I know our prices are high, but at least our quality isn’t.”

But back to my question, why do we expect anything else? After all, America’s national debt expanded much faster under Reagan and the Bushes than under Carter and Clinton. Yup, for over 30 years the Party of Fiscal Responsibility did far worse than the Tax-and-Spenders. But now the budget deficit is at an all-time high under a Democrat.

It’s tempting to say “Aaugh!” but I’m wasting my breath. We are naive if we expect our Washington decision-makers to protect us from the storm of rising interest rates, more expensive imports, reduced government services, higher taxes, and other dangers economists see coming from the next ten years’ budget deficits.

No, instead we need to concentrate on how we as individuals can sustain our families and communities. Looking for ways to do that is what this blog is about.

(It was you and me Lucy was really thinking about each time she pulled the ball away, if this unpublished strip is genuine.)

Next Post
Small was beautiful (and can be again)