Flood maps aren’t just for mortgage lenders anymore.
They’re for planners (like you and me). 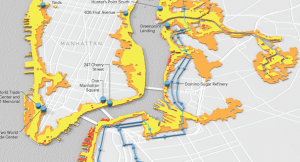 Thousands of homes were flooded in New York City during Superstorm Sandy – even though they were outside the FEMA-defined floodplain. Since then, the city challenged FEMA to produce maps that are both more accurate for current storms and that take into account higher sea levels in the future.

The result: FEMA agreed to produce maps showing which homes will be at risk in 2050, based on the sea levels expected at that time. Now that flood maps have found their way into zoning laws, land use regulations, building codes – and homeowners’ long-term financial plans – their accuracy has taken on value far beyond setting flood insurance rates.

Maps from NOAA are available for NY and NJ. Let’s hope they come out for other states.

The sooner we build protections, the less we’ll pay for them. For years, Rhode Island planning