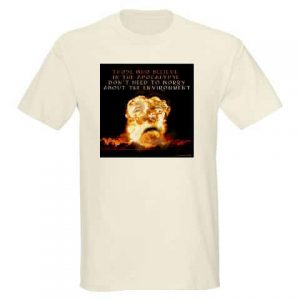 It says, “Those who believe in the Apocalypse don’t have to worry about the environment.”

I’ve been trying to understand why conservatives reject the chance to lead the country on global warming? It was Pres. Reagan, after all, who instituted cap-and-trade to halt acid rain, a similar threat.

I see fighting climate change as a cause with CONSERVATIVE stamped all over it:

I think I’ve found why it’s not.

My neighbor believes that soon Christ, in his Second Coming, will “Rapture” his true believers from Earth and establish a Kingdom of God, leaving everyone else to perish in the Apocalypse. 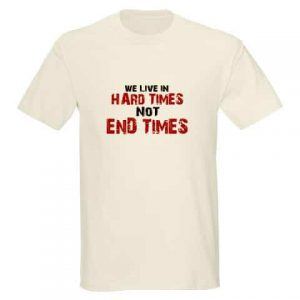 According to believers, in that end-of-the-world conflagration, most of mankind must perish before the thousand-year Paradise on Earth can begin. For those who are expecting to be Raptured into Paradise, the sooner the Apocalypse comes the better. And global warming scenarios certainly can sound a lot like world destruction.

My neighbor is not alone. 44% of Americans (52% of Republicans) say that the severity of recent natural disasters is evidence of what the Bible calls the End Times, not of climate change. That’s why many believers (and some Congressional leaders) think that resisting climate change would be resisting God’s plan.

Now that May 21st – the the most recent prediction for the Rapture – has passed and my neighbor is still here, I’m hoping he and other believers in the End Times will decide it’s worth stewarding ‘God’s Creation’ a while longer.

Save time, save money. Don’t buy my book. I can’t tell you how exciting it is