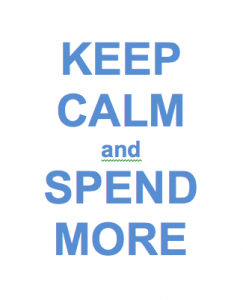 Spending to climate-proof our communities? There simply won’t be enough money to go around. That’s the premise for all the tactics to dodge climate costs offered here at ClimateProof.org. Real protections like new water sources, relocated airports, higher seawalls, raised streets, sewer upgrades, and lots of other concrete stuff all need money. Plus we’ll want to spend on softer protections, like stronger disaster relief and migration assistance.

These outlays compete with the nation’s existing infrastructure needs, Social Security obligations, asthma programs, and other priorities. We’ll never find all that funding, so we’ve been preaching that families should find ways to safeguard their own finances and lifestyle. Like moving to a more climate-proof hometown.

But, hey, we can simply print money! Why didn’t we see this before?

Will spending to climate-proof the US go up?

This simple Modern Monetary Theory is making inroads, first on Wall Street, now in Washington. It’s led by Stephanie Kelton, former chief economist at Chase Bank and long-time ‘kook’ economist – until important people started listening to her. She says governments shouldn’t be directly constrained by how much programs cost. Deficits apparently don’t matter, despite what economists and politicians have been saying for decades. Kelton tells us “The basic idea is that the government can’t run out of money. The federal government can create the money we need simply by spending it. It doesn’t need new revenue; it doesn’t need tax hikes.”

Of course, there’s one constraint on this added spending. It can cause inflation. But when inflation is low and the economy strong, like today, let the cash flow, the theory goes. And it seems our politicians agree. For the Republicans to pass a budget last winter that knowingly raises the annual deficit above a trillion dollars, well, that sure sounds like they believe in Kelton’s new theory.

Whether or not the federal spigots open further, we should start pushing our elected officials to make spending to climate-proof our communities a priority. (Remind them that a dollar spent on disaster avoidance pays back over $4 in future disaster costs. Road and bridge projects offer a tiny fraction of that.) With help, our elected officials will know where best to use any newly printed money.

Oh, by the way, concentrate on federal officials. Not only can’t the states print money, most are required to balance their budget each year.