Red town. Blue town.
Is there a difference? 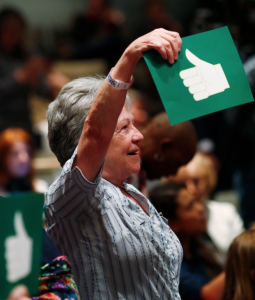 Many hometowns across America face physical threats – drought, flooding, wildfire, rising asthma and others. Some face financial handicaps – lack of municipal savings, a low bond rating, or unfunded liabilities that prevent them from protecting against those threats.

But some towns are in even worse shape. They have a bad attitude. Overconfidence, short-sightedness, and ignorant beliefs can be even more dangerous than physical dangers or financial weakness, creating big barriers to protecting the town’s infrastructure, jobs, housing and local economy. Can a town’s ability to keep climate-change costs low depend on its political beliefs? At Climate-Proof we think that not all political preferences need affect a town’s willingness to protect itself. Which beliefs matter?

Is it necessary for a town’s leaders and voters to believe their growing problems are caused by humans, through carbon emissions? (Although 79% of Liberal Democrats believe this, only 15% of Conservative Republicans do.) It’s an important belief for saving the world. But if we’re focussed on saving our town, it’s not. Action steps to counter coastal erosion, drying wells, stormwater overflows, or more intense allergies don’t call for acknowledgement of global warming.

Strongly Republican towns like Lancaster, CA and Abita Springs, LA (solar energy), Helm, CA (drought protection), Sweetwater, TX (wind energy) and Tamaqua, PA (‘rights of nature’) are all taking actions to protect themselves against global warming – without ever mentioning the phrase. They speak of public health, safety, property, sustainability, quality of life, new jobs, resilience, and other concepts that their conservative residents agree are important.

“Climate scientists are right.” Not needed.

A belief in the experts? (34 – 50% of Republicans believe that climate scientists’ findings are self-serving and unreliable. Only 8 – 17% of Democrats share this mistrust.) If we’re not talking about the causes of global warming – only its effects – we don’t have to trust climate experts. But to create a more climate-proof hometown we do have to trust technical experts on flood protection, water conservation, municipal finance, allergy prevention, pollution control, etc. They’re the specialists who are critical to building protections for our town.

Here’s the belief that’s does make a difference. If residents perceive there’s a good chance that extreme weather events, drought, growing disease conditions, or rising sea level could actually hurt them, they are far more likely to take steps to protect themselves. (Surveys tell us that around 65% of Liberal Democrats believe these problems are ‘very likely’ to occur, while only around 20% of Conservative Republicans do.) And the belief that ‘it won’t happen to us,’ can mean the difference between early efforts to prevent problems and years of inaction as threatening conditions build and build. Waiting to protect a community can endanger residents, erode the local economy, and put property values on a slide. What’s more, preventive measures can be four times cheaper than the costs of damage.

So, how can you fight off political dangers?

First of all, try to push politics out of the words your community uses in responding to what threatens it? Get an agreement that you can all work together to fight its effects without needing to agree on its causes. The Outer Banks of North Carolina are a good example. After years of resisting actions to protect these towns against against ‘sea level rise,’ local authorities are now taking action against ‘flooding.’ Ignoring the diagnosis and just treating the symptoms, while frowned on in medicine, can make big progress in fighting local effects of climate change. Actions don’t require a belief in invisible greenhouse gases, just in visible water levels.

There are a number of techniques that can help you create non-partisan discussions locally.

Of course, there are some communities that are in serious danger from climate change and are politically paralyzed against taking action. If you despair of your town’s attitude, you should consider moving – before the oncoming damage and decline. For those who are thinking of moving, check our Where-To-Live Scorecards to find a relatively climate-proof hometown. If you’re leaning toward a community that will face serious climate threats, check its Red-Blue voting record. All else equal, the more blue the town, the more likely it is to have the awareness, leadership, and political will to protect itself. But remember, voting history is only an indicator. You should check locally to see what attitudes and actions the townspeople are actually taking today.

Next Post
Climate change is boosting flu risks and costs