A city dying of thirst? The prequel.

At about a 30% water shortage, residents predicted the city would deteriorate.
35% reductions have just been mandated.

Santa Cruz, a county of natural beauty between the Pacific Ocean and the Santa Cruz Mountains, is rated at “Extreme” risk for long-term water shortages. (400 American counties have such ratings. Another 600 are rated “High” risk.) 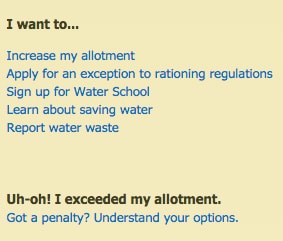 Way back in 2003, to involve its residents in visualizing the problems ahead, the city asked how people would feel at various levels of water rationing. Looking into the future, the predictions were scary.

At 10-20%, reduced outdoor watering, shorter showers and other small measures would be “inconvenient.”

At 30-50%  most landscaping would be gone, pools and common laundry facilities closed, money spent to find and fix leaks. Lifestyles would be “significantly affected.” Personal finances would start contracting. Families would begin moving out.

Many businesses depend on water, and when it becomes unavailable, they move too. The landscape industry would be the first to go. As restrictions rise past 30%, restaurants would struggle to maintain health standards. Hospitals and clinics would cut services, maybe handling emergencies only. Golf courses would close and revert to rough ground. Visitors will stop coming. Jobs would disappear. As water sources dry up, water quality can drop too, requiring investment in more expensive water treatment.

50-60% reductions, residents said, would be “catastrophic.” Parks and playing fields would turn to dirt. The town would lose its looks. Serious conflicts among neighbors and the municipal government were expected. Property values would plummet. Programs sponsored by federal taxpayers would likely grow. Many residents would leave.

We’re no longer looking into the future. Last week state restrictions, as high as 36%, were announced. Are the privations matching the predicted pain?

Next Post
A city dying of thirst? Seven costs.

Climate-Proof extending its message via a new syndication group

Can local actions substitute for federal help against the costs of warming? Luckily, there’s a whole lot