A gopher would be smarter 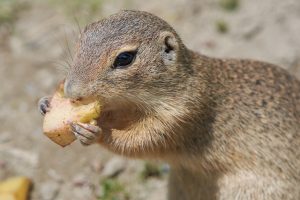 “Smart little outfits, the gophers,” the hunter observed. “I mean the way they have things figured out. Whenever you come upon a gopher village you can be sure it will be near a patch of grain where they can get their food, and close by a creek or slough for water. They’ll not build their towns near willow clumps or alders for there’s where the owls or hawks will be roosting. And you’ll not be finding them near a pile of rocks or stony ledges where their enemies the snakes will be hiding ready to snatch them. When these wise little fellows build their towns, they search out the southeast slope of a knoll that will catch the full sweep of the sun each day to keep their dens warm and cozy. The winter blizzards that pound out of the north and west and leave the windward slopes of the rises frozen solid will only drift loose powder snow on top of their homes.

“When they dig their dens,” continued the hunter. “do you know what they do? They slant the runway steeply down for two or three feet and then double back up near the surface again where they level off a nice dry shelf. That’s where they lie – on their ledges, cosy under the sod roots, out of the wind, warmed by the sun, close to their food and water, as far as they can get from their enemies, and surrounded by all their gopher friends. Yes sir, they sure have it all planned out!”

“Is our town build on a southeast slope?” the small boy asked thoughtfully.

“No,” said the hunter, “our town slopes down to the north, in the teeth of the bitter winter winds and cold as a frosty gun barrel.” He frowned. “Even in summer the breezes work against us. When we built the new flax mill, the only mill for forty miles, where do you think we put it? We built it right smack on the only spot where every breeze in the summertime can catch the smoke from its chimney and pour it across our houses and into our open windows!”

“At least our town is near the river and water,” said the boy defensively.

“Yes,” replied the hunter. “But where near the river did we build our homes? On the low flat land inside the river bend, that’s where. And each spring when the snows melt on the prairies and the river swells, it floods out every cellar in our town.”

“Gophers would plan things better than that,” the small boy decided.

“Yes,” said the hunter, “a gopher would be smarter.”

Next Post
Where to live to lower your federal taxes

Your hometown matters
Where to live to lower your federal taxes
Is Hurricane Florence the trap door under coastal home values?
Cli-Fi
©2019 ClimateProof.org. All Rights Reserved • Privacy, Copyright & Liability