Are Texas and Florida storm victims about to suffer the same delays in financial relief that Sandy victims endured? Are climate-proof family finances less achievable in coastal America than ever? (This post has been updated since it was first published July 24, 2013.) 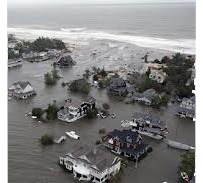 “The biggest step forward in salvaging neighborhoods back is to help people get in their homes.” So intones a New York City official about to distribute almost two billion in federal aid to victims of Hurricane Sandy. Two billion dollars is far less than most disaster and community officials say is needed. And it’s been more than six months since the damage was done.

Waiting recipients fall into two groups. First, those with damaged or destroyed homes who’ve waited seven months already for their money – since Sandy in October. They’ve waited while 180 Congressmen and 36 Senators voted against the Sandy Relief bill . . . while FEMA’s bureaucratic wheels ground out the payments . . . and now while local contractors are being smothered with requests.

Second, those who somehow found the funds, the time, and the will to do their repairs and rebuilding unassisted. They’ve depleted their own savings waiting for the long-delayed claims payments.

The warning from Climate-Proof at the time: if you live on the coast and are hoping to build climate-proof family finances, you should see the handwriting in the sand. At the same time you face rising risks of a catastrophic storm, the risks are growing that federal, state, and local governments will provide less help, less quickly than you expect.

In fact government’s eagerness to help may have actually declined since Sandy. As Naomi Klein puts it

“As one of the most powerful storms ever recorded bore down on the continental United States, with much of Florida under evacuation order, President Donald Trump was focused on a matter of grave urgency.

“He gathered his cabinet at Camp David and said there was no time to waste. With Hurricane Irma set to potentially devastate huge swaths of Florida, Georgia, South Carolina, and North Carolina, now was the time, he said, to rush through massive … tax cuts.”

The impact on family finances caused by climate disasters and slow, indifferent government response are among the reasons that Climate-Proof’s Where-To-Live scorecards assign low climate-proof ratings to towns in coastal counties and states. Then there’s the possible arrival of Hurricane Maria next weekend and the possible expiry of the National Flood Insurance Program the weekend after that. All things considered, I can’t help predicting a long-term decline in the appeal of coastal and riverside property.

What do you think?

Next Post
Millennials, we’re putting our good life on your tab. Thanks.

Want help with climate disaster risks? Congress prefers to protect us from a different hazard. This morning House Republicans announced

The federal government may no longer help to slow global warming. Will they continue to pay