Growing reasons to climate-proof our investments

More companies grudgingly warn us
of climate risks to their stock value. 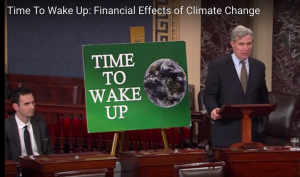 “Republicans in Congress ignore climate change for the simple reason that the fossil fuel industry has become their political life-support system,” said Sen. Sheldon Whitehouse (D. RI) earlier this month. “It does not have to be this way. Outside this chamber, even Republicans see things very differently. In the investment sector, where people have to make decisions based on real facts and where duties to shareholders limit overly creative accounting, the Republican signal is clear.”

Whitehouse goes on to point out advice from Goldman Sachs (Equity Investor’s Guide to a Low Carbon World) and BlackRock Investment Institute (Adapting Portfolios to Climate Change) discussing the impact of warming on our personal finances.

“Just last week,” he said, “Chevron acknowledged to its investors in an SEC filing that, lo and behold, some of its products ‘may be considered pollutants,’ noted ‘new conclusions about the effects of the company’s operations on human health or the environment,’ and acknowledged ‘an increased possibility of governmental investigations and private litigation against the company.’ Now it’s time for the rest of the industry to report . . . first on the risks that shareholders bear from assets that are . . . falsely valued in their reports and, second, on the company’s potentially culpable behavior.”

Along with local action and the courts, will these new investments help protect against the effects