Finally, some evidence that Florida
property prices don’t have a sky hook. 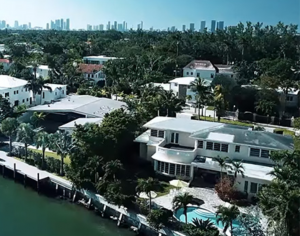 Back in the boom days of the 1920s, scam artists were selling Florida swamps to eager buyers in the north. The comedian Milton Berle joked, “I just got wonderful news from my real estate agent in Florida. They found land on my property!”

Today, developers have spent a century filling wetlands to create residential lots. But nature is starting to take Florida real estate in the other direction. Sea level rise is finally affecting the rise of real estate prices. Evidence has been mostly anecdotal to date, but new studies by the University of Colorado with Penn State and with Harvard find that homes in lower elevations are in fact selling for less and gaining value slower than similar ones at higher elevations.

Yes, unlike other US markets coastal real estate in Florida is generally still buoyant. Miami Beach condos are still booming, thanks to investors with short-term goals, and lots of overseas money. But price erosion from sea level rise appears to have started.

Will the values drop gradually or suddenly? Just as the boom mentality of the early 1920’s lifted prices quickly, it’s possible that a few more studies like these about sea level rise could suddenly trigger a bust mentality. Which means if anyone says “You should think about getting a place on the Florida coast,” be as leery as Berle should have been back in the ’20s.