Technology to the rescue?

A sheet of carbon hexagons called graphene has so many promising properties that the EU just gave researchers a billion-dollar research grant. (Guess how much the US government is spending.) Scientists can apparently get graphene to convert a photon from the sun into multiple electrons – electrons that become an electric current. That’s way more efficient than current one-photon-one-electron silicon technology. 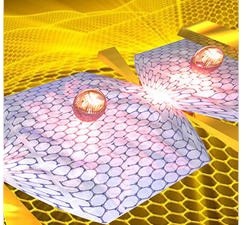 My family is keeping our fingers crossed.

But the benefits will still vary widely. After all, solar power works best where there’s lots of  sunlight. US cities and towns vary widely in how much sunlight falls on them. Climate-Proof has rated each town in America for its average sunlight over the year. It’s one of our free Where-To-Live Scorecards.

These numbers are based on insolation readings at the nearest government measurement station.  The station at Twentynine Palms in California, for instance, receives 5,487 watt-hours per square meter. Bellingham International Airport receives only 3,133. As a result, utilities, municipalities or private groups collecting and distributing solar power will pay widely different costs for a kilowatt-hour of the stuff.

Throughout America’s past people settled near plentiful energy, where streams could power mills or coal could fire furnaces. Whether it’s graphene or steadily-improving silicon, if our future – or our children’s – is to be powered by sunlight, it makes sense to settle where there’s lots of the stuff.

Next Post
Will dementia swamp the system, drain our savings?

When joining a solar garden, location is key

To lower your energy losses stick close to transmission lines. A new study published in the Proceedings

Community Solar: No roof? No money? No problem.

Lower your costs and expand your solar access with this community energy plan. The demand