Push your town for a climate disaster plan.

Will 2018 cost you?
Here’s a local initiative we can get behind. 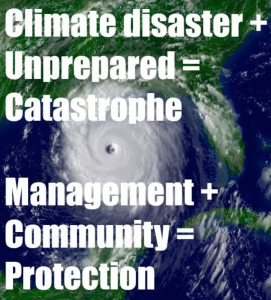 The New Year is in full swing, and I don’t think I’m alone in declaring that 2017 was indeed a rough year. No, I’m not talking about personal or political setbacks. I’m referring to the catastrophic wildfires that swept across California and the hurricanes that devastated parts of Texas, Florida, and Puerto Rico. I’m talking about the Midwest tornado outbreak, the Missouri flood, the Montana drought, and the costly hail storms to hit Minnesota and Colorado.

I’d bet you or someone you know was affected by these extreme weather anomalies. I live in California, only 30 miles from the devastating Atlas wildfire. My parents live in Florida and evacuated to Georgia just prior to Hurricane Irma making landfall. My sister lives in Mexico City, and experienced the horrors of the September earthquake. My entire immediate family suffered costs, disruptions and fears from Earth just doing its thing.

In 2017 alone, there were 16 weather and climate disaster events across the United States that exceeded $1 billion in damages. The total is estimated at $1.5 trillion, or almost $5,000 per person, and that’s paid by Americans one way or another. Furthermore, droughts, floods, freezes, severe storms, and wildfires resulted in the deaths of 362 people.

We can do nothing to prevent these extreme weather occurrences from happening, but we can do more to protect our family, our homes, and our finances.

How others are using climate disaster plans

Climate disaster plans are not new. Boston has had a comprehensive Heat Wave Plan for years. It defines the city’s response, and short and long-term solutions for mitigating the stresses of heat waves, especially for the health risks threatening its citizens. After all, over the last 30 years, summer heat has claimed more American lives than flooding, tornadoes, and hurricanes, according to the U.S. National Weather Service. And deadly heat waves are only becoming more frequent over a much greater portion of the planet.

Boston’s Heat Wave Plan is an excellent example of a city being proactive in protecting its residents. Boulder County, Colorado had no such plan, so citizens pushed their local government to create a climate disaster plan of their own. After the 2010 Fourmile Canyon Fire destroyed 169 homes and 6,181 acres, hundreds of Colorado residents, stakeholders, and agency staff contributed to the creation of the Boulder County Community Wildfire Protection Plan, a plan which “increases and improves wildfire mitigation and preparedness efforts in advance of wildfires.” The plan has been in effect since 2011, and the county has yet to experience a fire as tragic as the Fourmile Canyon Fire, despite increasing wildfires.

Where is your town most vulnerable? Heat waves, like in Boston? Wildfires, like in my California hometown? Storm surge? River flooding? And does your local government have a climate disaster plan already in place? If not, now is the time to push your town to create their own set of plans. Check your local government’s website for the next town meeting. Towns often welcome participation on boards and commissions, and at public meetings and hearings. Bring up Boston. Bring up Boulder County, Colorado. Surely their town’s climate disaster plans can be modified to suit your own.

Create a climate disaster preparedness group in your community. Together you can work with your city council to see how an advance relationship with third-party organizations such as the Red Cross, Team Rubicon, or other member of the National Voluntary Organizations Active in Disaster can help your town create climate disaster plans. The Red Cross has plenty of checklists to help get you started with disaster preparedness. Towns that adopt guidelines relating to preparation and early warning of the community can be certified Storm-Ready by The National Weather Service. Emergency managers can earn recognition for their jurisdiction by meeting program guidelines.

And don’t forget state resources.The States At Risk website from Climate Central evaluates the preparedness plans and actions in each of the 50 states. It looks at both risk and preparedness for extreme heat, drought, wildfires, inland flooding and coastal flooding. If you live in a low-scoring state, that’s all the more reason to work on making your town a more resilient, wiser, better prepared community.

Next Post
Do political beliefs create a more climate-proof hometown?