Heavy rainfall and snowmelt are causing record flooding this week.
Are you in the floodplain? Do you have a flood plan? 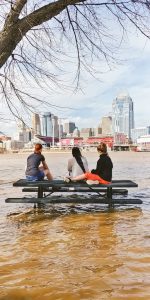 With sea levels predicted to rise even more than we expected, those of us living away from the coasts are off the hook from surging water levels, right? Wrong.

The recent floods in the Midwest and South only confirm that none of us can escape the rising water levels (and costs) brought on by climate change. Rainfall from Winter Storm Oliver just melted snow across several regions of the nation, causing deadly flooding that put hundreds of people in shelters. Indiana hasn’t seen flooding like this in the last 45 years. Lansing, Michigan declared a state of emergency, as the Grand River threatened homes. Over 23,000 homes in Texas sat without power. Deaths have been reported from Oklahoma to Illinois as the result of vehicles being swept off the road.

Heavy rainfall is increasing. And in places where snow and ice were once common, climate change is now transforming the accumulation and melting of snowpack. This transformation will carry on as temperatures continue to rise and the timing and quantity of rainfall continues to change. Stormwater flood costs are the most common and most expensive natural disaster in the US. The National Flood Insurance Program provides a flood damage simulator to predict the total cost of repairs for an entire house in the event of a stormwater flood. For 1-4 inches of water, the estimated cost is $7,800. For 9-12 inches, $18,930. And for 18 inches of water, estimates are upwards of $26,285.

Cedar Rapids, Iowa is taking steps to improve their infrastructure after another record-breaking floods last year. Residents saw 10 of their 11 bridges shut down in the metro area after the Cedar River spilled into the streets. Emergency vehicles couldn’t get to emergencies. So Cedar Rapids decided to climate-proof their town, instead of waiting for the next catastrophe. The city is building a levee and floodwall system around the sewage treatment plant to prevent future sewer service outages. And they are elevating bridges to accommodate the high river levels. Maybe it’s time for your town to do the same.

The American Society of Civil Engineers gave the US overall a D+ (“poor to fair condition and mostly below standard”) on its 2017 Infrastructure Report Card. Some states are better than others. How does your state rate? Here are some suggestions for protecting yourself and your community:

This week’s floodwaters will recede, but increasingly intense precipitation caused by warming means they’ll be back.