The future of the Winter Olympics is in jeopardy 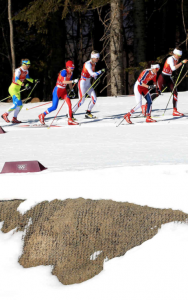 Of the 21 cities that formally hosted the Winter Olympic Games, almost half of them may soon be too warm to ever host again. This winter warming is a continuing trend. Average temperatures for the Winter Olympics held from the 1920s to 1950s were under 33 degrees F, around 37 degrees for games held during the 60s and 70s, and more than 46 degrees for games held since 2000. We could see temperatures warm an additional 10 degrees by late in the century.

The Winter Olympics have had trouble with snow for years. The 2010 Vancouver Games rarely saw temperatures fall below freezing. They had to bring in 1,000 bales of hay to be covered with artificial and natural snow. And the 2014 Sochi Games stored snow from the previous winter in shady places and covered it with insulation. Sochi organizers also embedded underground pipes with dry ice to preserve the snow, cooling it from the bottom up. Despite having enough snow for the Games to go on, many practices were cancelled and the courses were generally deemed unsafe due to icy conditions. (This is a common occurrence when pumping artificial snow).

The current artificial snow method is not the answer

Artificial snow can’t stand up against the warmer weather. The technology involves pumping water through tiny nozzles at high pressure. When the water hits the cold air, it freezes almost instantly and turns to snow. No cold air means no snow. Our current synthetic snow production methods will soon be obsolete.

Researchers in Norway are seeking to develop a new, energy-efficient approach to climate-proof skiing, one that ditches the traditional snowmaking methods of pumping water into cold air. Regardless of the outdoor temperature, they believe a modified heat pump system could work to not only produce artificial snow for the slopes outside, but to heat nearby indoor facilities.

In the meantime, we are grasping to keep the winter spirit alive here in the US. Buck Hill Ski and Snowboard Area in Burnsville, Minnesota recently opened an innovative, synthetic surface ‘dry’ ski slope that is credited as having the same gliding surface as snow. No water needed. The Liberty Mountain Snowflex Centre in Lynchburg, Virginia has a similar setup. Could this be the future of the Winter Games? If new snow creation and preservation methods come to your local ski resort, you can expect your ski lift price to cover the extra costs.

You can’t ski past these rising costs

Following an unusually long California ski season in 2017, we saw a spike in ski rates across the state this year. Lake Tahoe ski resort rates increased 11%, while Mammoth resorts increased nearly 24%, pushing the adult annual pass to a hefty $1,049. According to one study published in 2013 by the National Ski Areas Association, 54 percent of one-day skier visits came from households earning more than $100,000, a 12.5 percent increase from five years prior. With a national median household income of around $60,000, can most of us even afford this costly sport now?

In a nation where the $12.2 billion winter tourism industry generates more than 560,000 jobs and $8.8 billion in federal and state taxes, more than our winter fun is on the chopping block. And like fishing, beachside recreation, wineries, coastal and ski-area property, and other industries, the ski industry could be decimated by climate change.

If you are a skier, maybe now is the time to take up alternative winter sports, like shovel racing or ice blocking. It is likely that slope sports will transition to ‘dry’ or artificial snow slopes, so keep an eye out for potential climate-proof skiing investments and inventions, like Norway’s “Snow for the Future” program.