We know there will be many consequences from climate change.
Who would have thought of this one? 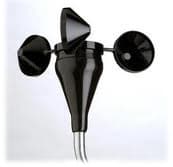 Wind speeds have been dropping at some points in New England. A presentation at the American Geophysical Union in San Francisco recently reported that average wind speeds at T.F. Green Airport in Rhode Island dropped from 9 knots to 7.7 knots from 1975 to 2011.

One possible reason, according to the report’s author: “Southern New England has typically had a long period of frequent winter storms, but with climate change, that pattern of winter weather is shifting to the north, meaning we may be in that pattern less often. If those mid-latitude storms aren’t here as often, average wind speeds will decrease.”

There’s hope this is not a pattern. The study is based on very few locations, and there may be other explanations for the decline.

Wind power, as fossil fuel prices rise, should be increasingly attractive. The Department of Energy has set a goal to have 20 percent of US electricity generated from wind power by 2030. But these new data could be, uh, a straw in the wind.

The bright side: if wind speeds are changing, our free Where-To-Live Scorecards evaluate potential wind energy county by county across the country.

Next Post
Severe drought shows the past – and the future

Save time, save money. Don’t buy my book. I can’t tell you how exciting it is

Adapting to the climate in Washington

Slowing climate change became far less likely last night. But there are still ways to protect ourselves from